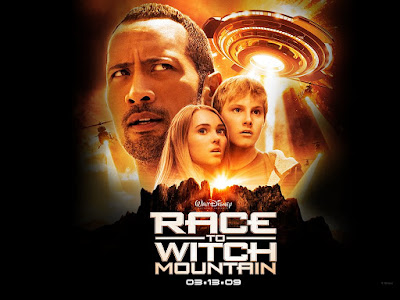 This re-imagining of the 1975 film, Escape to Witch Mountain is good clean Disney fun! It has the same flavor as the 1975 film and the 1978 follow up Return to Witch Mountain. Those films really inspired my imagination and it was nostalgic goodness to take my son to see the new film starring Dwayne "The Rock" Johnson (Jack Bruno), Anna Sophie Robb (Sarah), and Alexander Ludwig (Seth).

It's a simple story of two young aliens crashing on Earth to retrieve an experiment for their own dying planet. Our military coldly captures their space ship and hunts them down. Fortunately they hook up with a down and out taxi driver who gets caught up in their quest to save earth from invasion.

The acting was a little forced and I would liked to have seen better lines for the humorous parts but overall I enjoyed the ride! There were even cameo appearances of the original two space kids. Kim Richards (Tina the waitress) who played Tia Malone and Ike Eisenmann (Sheriff Antony) who played Tony Malone in the previous Witch Mountain movies)

So checkout Race to Witch Mountain with the kids before the real Star Trek hits the big screen in May!
Posted by -Bill at 4:53 PM No comments: 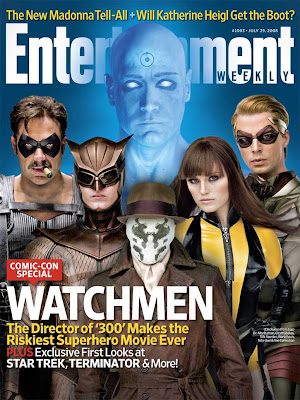 I had no prior relationship with Alan Moore’s graphical novel on which this movie is based. I was the run of the mill super hero fanboy of Superman, Batman, and Spiderman. (OK throw in Wonder Woman just to balance it out a little).
But make no mistake, Watchmen is anything but "run of the mill." It is an adult superhero film, with adult sex scenes, graphic violence, and adult language and themes. So don't take the kiddies to this one.
It is very dark almost to the point of depressing. Overall it was a compelling story with very interesting characters. Unfortunately I thought it lacked emotional depth. That may be debateable as the character's struggle with love, morality, and humanity itself. But I didn't find myself overly connecting with the character's just basically watching the story unfold.
Speaking of the story, it differs from most superhero flicks in that they don't battle some arch enemy or super villian, rather it is a "who done it" mystery and how they deal with it in the end.
I also thought the film lacked any humor at all. Would have loved the Comedian to have lived up to his name, rather he was the opposite, everything he did was far from funny. Maybe that's the point and the jokes' on me. The scenes in the prison had a few smiles, but each one was followed by a grimace.
From what I have heard, director Zack Synder has stayed true to the famous graphic novel and fans will no doubt enjoy seeing the character's brought to life. In fact the sets and special effects are quite impressive. The blue glowing Dr. Manhatten is a pleasure to watch.