A 503kg bull named Pajarito - "Little Birdy" - flew into the stands during a Mexico City bullfight, injuring several spectators before it was killed.
Television images showed the bull jumping from the ring into the stands, landing on spectators who tried to scatter as the animal roared through the aisles.
Talk about having to grab the bull by the horns!
Posted by -Bill at 10:41 AM No comments: 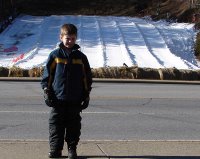 Jim took Ryan and I and Ryan's cousin and his dad to Tony's Tube World today! It was a blast snow tubing in 55 degree weather. For 20 bucks you get an hour and a half on the slopes. 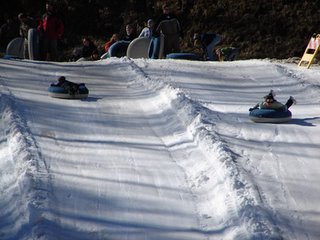 They have a conveyor belt on the left side that lets you ride back to the top. It's a life saver. 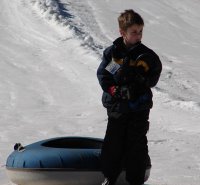 An hour and a half drive from Knoxville, its located in Maggie Valley North Carolina. It's worth the trip.
Posted by -Bill at 3:41 PM 1 comment:

An odd little film with two main actors and two supporting actors. The film is right up Pierce Brosnan's alley, but I can't decide if Greg Kinnear was the best pick for his role. Although in the film Brosnan's character remarks that they are exact opposites. So in a sense perhaps Greg was the right choice.

The Matator is about an assassin that meets a regular businessman in Mexico and a tenuous friendship develops. Jullian Noble, (Pierce Brosnan) finally confides in Danny (Kinnear) that he is an assassin. Danny doesn't believe him at first but Jullian finally convinces him.

Months later we find that Jullian is losing his nerve and becoming washed up. His boss decides to kill him and Jullian runs to suburbia seeking Danny his only friend in the world for help. The two incongruous men, Jullian a sex maniac, and Danny, a settled down family guy (although he and his wife think its cool that they know an assassin), become life long friends.

It was an interesting film and even though Pierce is scraggly looking rather than the suave gentleman he usually plays, he is still charming as a killer and I enjoyed seeing what he would do after leaving the Bond franchise. Cheers!
Posted by -Bill at 4:51 PM No comments:

Check out the movies coming out this year, here.

Even though this was another film with Jodie huddling in the dark hiding from the bad people, I still liked the movie. It has a few interesting twists that keep you wondering who the bad guy is and why things are happening to her.

And while the ending is predictable, it still manages to keep you on the edge of your seat in suspense.

It's that time of year

Well we placed our orders. We love Samoas and Thin Mints. Check out the complete line of Girl Scout cookies here.
Order yours today! 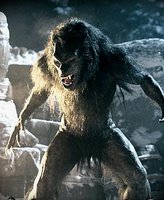 For my first movie of 2006, I chose Underworld: Evolution. I really enjoyed the first movie, Underworld. Kate Beckinsale (she's hot!) reprises her role as Selene the Death Dealer in this sequel along with her hybrid half-werewolf and half-vampire boyfriend Michael.

The film picks up right where the first one left off. Evolution seeks to expand the unfolding story from the first movie and continues to fill us in on the origins of the vampires and werewolves. As in the first movie, there is plenty of slavering Lycans and biting bat folk, mixed in with nearly as many gun battles as Joan Rivers has had plastic surgeries.

For my part, I think I liked the first movie better. It was a refreshing tale and new perspective on the vampire/wolfman genre. The characters were interesting and the story compelling. The sequal doesn't give us much in the way of anything new save that the master vampire has wicked wings and can fly. I'll probably pick up the DVD to complete the story.
Posted by -Bill at 3:38 PM No comments:

Jim took Ryan to see David Copperfield! He had a magical night and as hard as we tried we couldn't get Copperfield to make Ryan disappear.
Posted by -Bill at 7:29 PM No comments:

O God who has set us in a world of soaring beauty, and profound mystery we look back and recognize, in ourselves, the dawning of a conviction that life is not simply a random series of opportunities and disappointments.

We look back and acknowledge that our life has been a gift, a gift to be lived out fully between the twin poles of freedom and responsibility.

And now we step forward, free in the knowledge of how little is really essential. Responsible in the conviction of how much is desperately needed.

Thank you for your grace which is the flame of love, leaping up in our hearts, and setting our lives afire.
Posted by -Bill at 7:02 PM No comments: 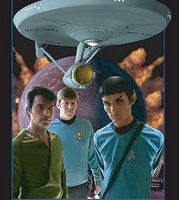 They're back! Sort of.... The show that propelled me into Geekdom was The Original Star Trek. A group of brave souls have been working for the past ten years to pick up where the original show left off. Kirk, Spock, McCoy, Checkov, and Sulu continue their five year mission with Star Trek New Voyages!

This internet show has the blessing of many of the original show's producers, writers, and actors. Some of the original actors are considering reprising their roles. The first episode is available for download on their site.

Only in America can you profit from the horrible disasters inflicted on others.
You can now take a BUS TOUR ($35 for adults, $28 for kids) to see the devastation Hurricane Katrina left in the city of New Orleans!

But don't worry Grey Line Tours is gonna donate a whopping three bucks per ticket to relief organizations like American Wetlands, (save those crocs!), and the Jazz Foundation (save our Jazz!)

Don't forget your camera folks, or your sensibilities.
Posted by -Bill at 9:55 AM 1 comment: 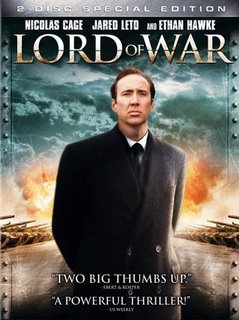 This is a great Nicholas Cage Movie! It really makes you think about the choices we make in life, the things that happen to us, and setting our priorities.

If you like Nick, this is a must have. The ending is surprising as well. Check it out!
Posted by -Bill at 2:25 PM No comments:

-Chris Knight, Real Genius
Posted by -Bill at 10:00 AM No comments: 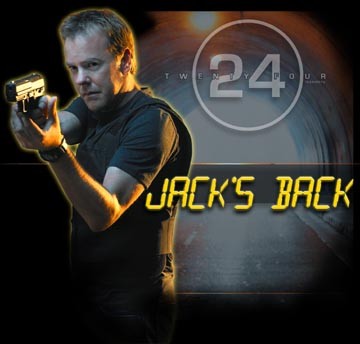 Don't forget to catch the new season of 24! The four hour premire is this Sunday and Monday!
Posted by -Bill at 8:33 PM 1 comment:

Hey, Bill. How's the World Been Treating Ya?

In a fit of depression, I forgot about DVD Tuesday!!

Pick up the Transporter 2! If you don't have T1,
get that as well. Jason Statham is no James Bond
but I'll give him a close second!
Posted by -Bill at 2:01 PM 2 comments:

Yipppi, I am so excited that I wrote this poem....

So last night as I was lying in bed, my mind roared and raced--
my heart, too.
I had this ball of tension spinning around inside me, as I wondered what's around the next bend for me.
Maybe nothing, and that's ok.
But.
If it's something...
It's electricity swimming through my layers of skin and nerves and muscle,
skidding along my bones.
I feel it.
There is nothing whispered about it, nothing soft or shy.
It is loud and fierce.
I will own it.
Posted by -Bill at 8:07 PM No comments:

Hey did you hear we have one extra second this year? Holy Crap! What am I going to do with that extra time?

What will you do with your extra time?

I only have one; Be more intense.

If you need help with yours, check out the Top Ten New Year's Resoultions here.

When I ask people what happened to their last years resolutions, I usually find they come up with more excuses than a New Orleans Levee contractor.
Posted by -Bill at 7:22 AM No comments: