What's Aragorn (Viggo Mortensen) been up to since Lord of the Rings? Well ridding a horse through the desert in Hildalgo, and now smashing up and shooting bad guys like Chuck Norris in A History of Violence.

Viggo plays mild mannered Tom Stall. A friendly restaurant owner in a small town. Some bad guys roll into town and into Tom's coffee shop. When they threaten violence on his patrons, Tom takes them out. The story gets national attention and before long organized crime comes to the small own looking for Tom. Is it mistaken identity or is Tom's past coming back to haunt him? 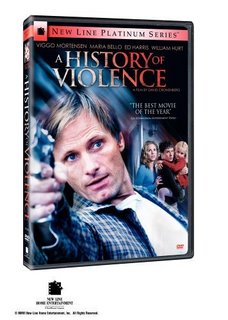 Viggo of course makes a great hero, but I was surprised by the casting of the bad guys, Ed Harris plays a mob strong man with an over the top scar on his face. The ultimate bad guy is played by the soft spoken William Hurt. Hurting for parts these days Bill? (pun intended).

Despite miscast bad guys and a fairly predictable ending, the story is strong and keeps you guessing. I enjoyed watching Viggo in a new role and I hope he will continue to be successful. Check out A History of Violence!
Posted by -Bill at 7:00 AM