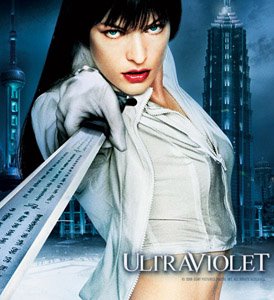 Ultraviolet. "Park it right here! Don't make me say it again!" - Violet. She learns the rules of parenting rather quickly as she takes a child under her protection. The child carries a virus that has the potential to wipe out the human race in this near future film.

Like Aeon Flux, two factions are fighting for ultimate control of the planet and Ultraviolet and her ultra-violent arsenal of weapons stands in the way of both sides.

With a dizzying body count that increases exponentially and mind boggling computer graphics, the movie is a series of unimaginative fight scenes with pauses of introspection by Violet as she tries to sort out what her life is and means. I agree with the opening statement she makes. "Mine is a world you may not understand." I barely understood the film. Is a hot chick, Milla Jovoich, and lots of butt kicking worth the $5.50? Maybe, but I should have seen 16 Blocks.
Posted by -Bill at 3:48 PM